The Duinocoin (DUCO) can be mined not only on the Arduino UNO, but also on various Espressif ESP8266 boards. Thanks to integrated WLAN, the boards only need a power supply and access to a WiFi AccessPoint, but no PC as a bridge computer.

Probably the cheapest way to mine Duinocoin (DOCU) is with an ESP8266-based microcontroller. Once programmed, an ESP8266 only needs a 3.3V power supply thanks to integrated WLAN - and it works.

The preparations can be done in about half an hour. With this setup and a single ESP8266, you can subsequently mine around 4-8 DUCO per day.

What is the difference between an ESP8266 and an Arduino UNO?

The ESP8266 is significantly smaller and cheaper than an original Arduino UNO and Arduino clone. Even inexpensive Arduino Pro Mini (without USB port) can hardly be bought for less than 5 Euros in Germany - the ESP-01, on the other hand, is available for about 1.90 Euros per piece. 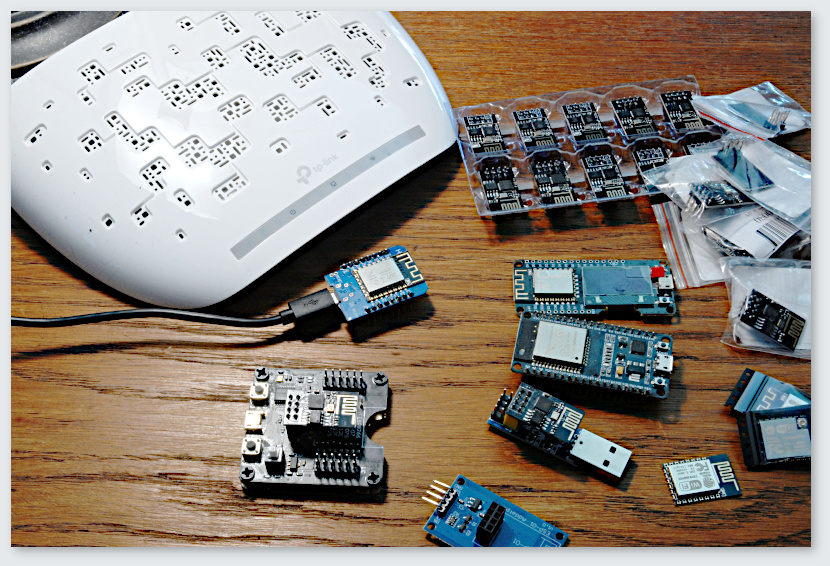 Since the Duinocoin uses the Kolka system to reward slow systems more than fast systems, unfortunately nothing remains of the extra speed in the DUCO wallet. The Arduino UNO creates around 8 DUCO per day, an ESP8266 creates less DUCO: on average only 6-7 per day.

Nevertheless, ESP8266 boards have an advantage over the Arduino UNO and the like, because they do not need AVR_Miner.py, which runs on a PC and mediates between the Arduino UNO and the DUCO servers. The ESP8266s come with all the communication software and connect independently via WLAN to the DUCO servers. A 3.3V power supply (or 5V via USB) is therefore sufficient to operate an ESP8266, and this could come from a solar cell combined with a power bank.

By the way: What is the difference between an ESP-01 and an ESP-01s? The ESP-01 is the older version and usually comes on a black board, the ESP-01s often on a blue one - but I also have ESP-01s on black boards. The ESP-01 has 512 kBytes of flash, whereas the ESP-01s has 1 MByte. An ESP-01 has a red power LED and a blue one on TX, the ESP-01s has no power LED and a blue LED on GPIO2 (low = on!). In practice, other differences are noticeable, for example in the handling of the deep-sleep mode. Personally, I have fewer problems with projects using the ESP-01 and can usually do without the additional flash memory of the ESP-01.

1. create a Duinocoin wallet on the project page

To be able to store the mined Duinocoin (DUCO) somewhere, you need a wallet. This is managed online at Duinocoin. The new wallet is created at https://wallet.duinocoin.com/register.html. 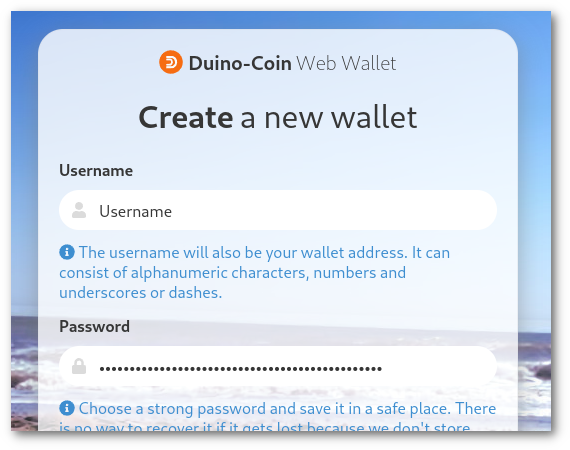 To program the mining software on an ESP8266 microcontroller, the easiest way is via the Arduino IDE (development environment). The free and open source software is offered by the Arduino Project as a free download for Windows, GNU/Linux and Mac OS X.

Tip: If you have problems accessing the ESP8266 via USB on GNU/Linux computers, you have to adjust the access rights to device files (serial ports, USB) under GNU/Linux.

The Arduino IDE is logically geared towards AVR microcontrollers like the Arduino UNO and its relatives. Fortunately, it can be easily extended. To be able to program ESP8266 boards, you have to give the board manager (board manager) a link to a JSON file provided by Espressif:

This URL is entered in the Arduino IDE under "File / Preferences" in "Additional board manager URLs:". The best way to do this is to click on the small window symbol to the right of the input line. A mini-editor opens in which you can enter one board administrator URL per line. 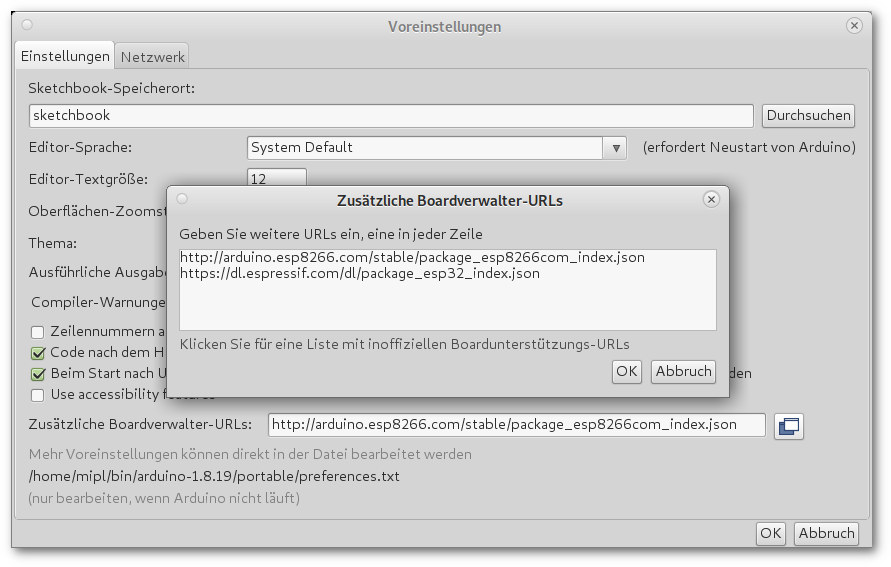 Through additional board manager URLs, the Arduino IDE can also program ESP8266 or other microcontrollers.

So if you use the ESP32 as well as the ESP8266, enter the following two lines there:

Click on "Ok" in both dialogues to apply the changes.

Now open the board manager and search for "ESP" with the type setting "All". After a few seconds, the two entries "esp32 - by Espressif Systems" and "esp8266 - by ESP8266 Community" appear, both of which should be installed. 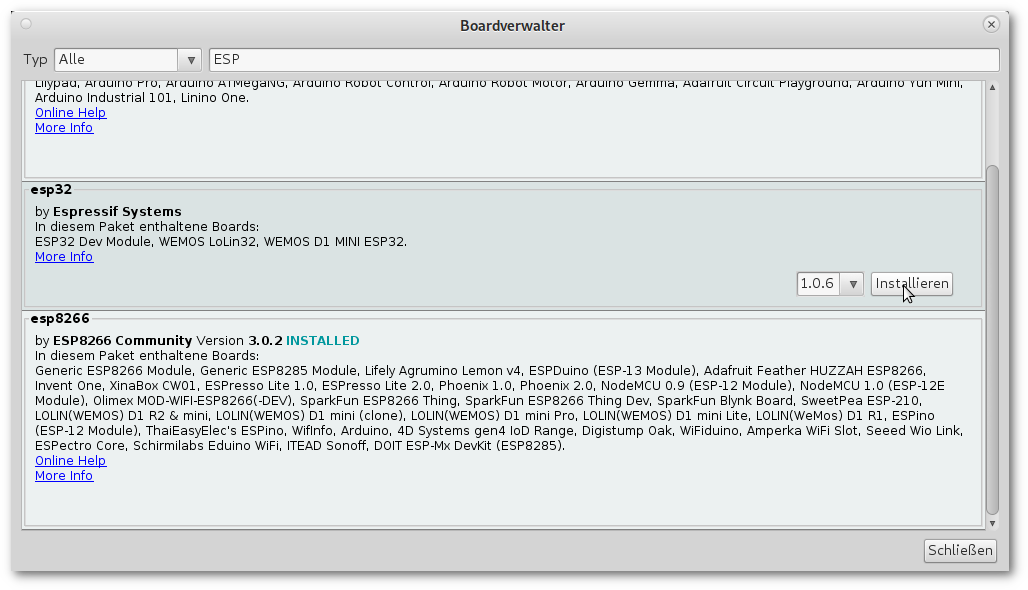 In the board manager you install and update the original and additional board definitions.

Now ESP8266 and ESP32 boards can be programmed with the Arduino IDE. Restarting the IDE is not necessary... but it does not hurt either.

The official standard software for Duinocoin mining with individual microcontrollers (no "rigs") is provided by the project as source code. The latest version is always available on Github. 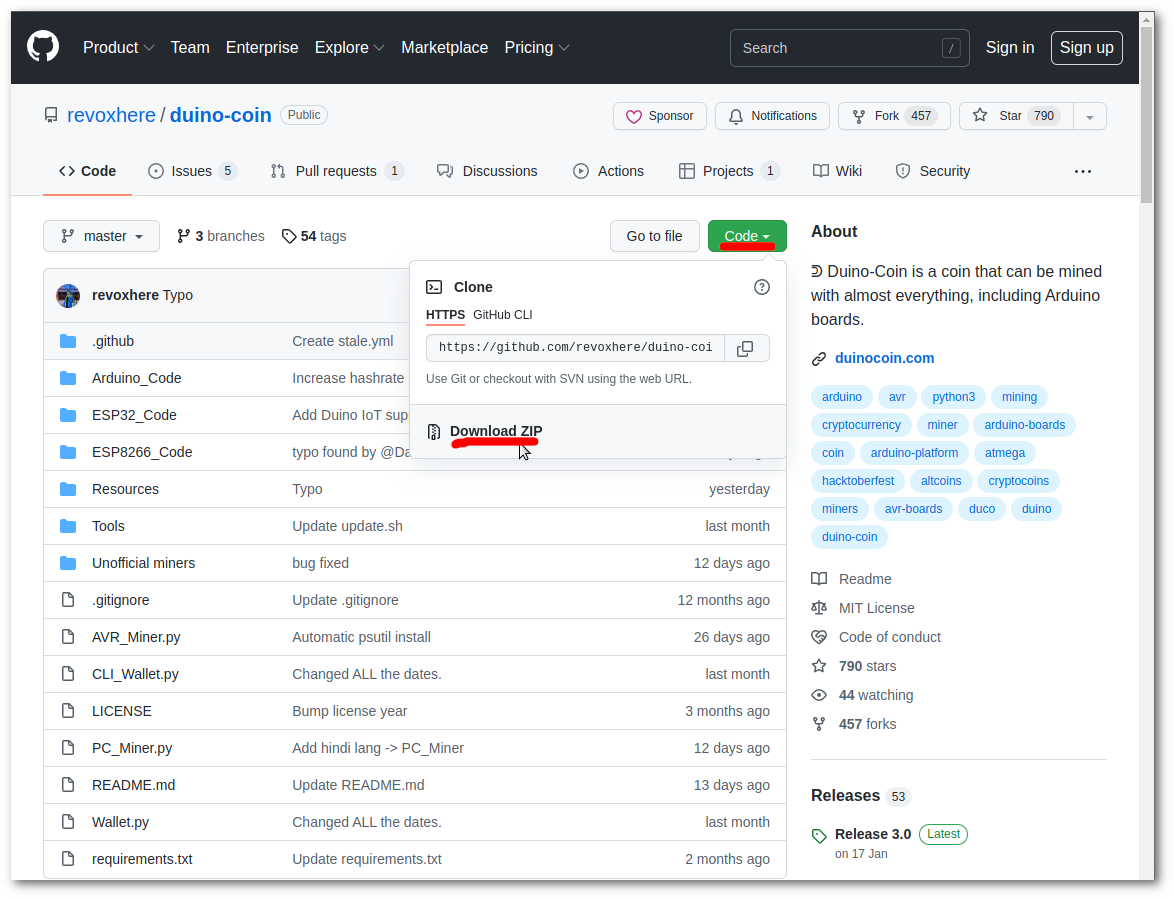 Via "Code / Download ZIP" the ZIP archive with the current Duinocoin code is downloaded and then unpacked.

Communication and mining take place on the ESP8266, so it needs the appropriate software. This can be generated directly from the source code in the ESP8266_Code directory and uploaded to the ESP8266 microcontroller like any other project (sketch).

Attention: In contrast to the Arduino UNO sketch, you have to make adjustments to the ESP8266 sketch: At least the WLAN SSID, the WLAN password and the name for the Duinocoin wallet/account must be set correctly!

When compiling, you will now get error messages because some header files cannot be found. 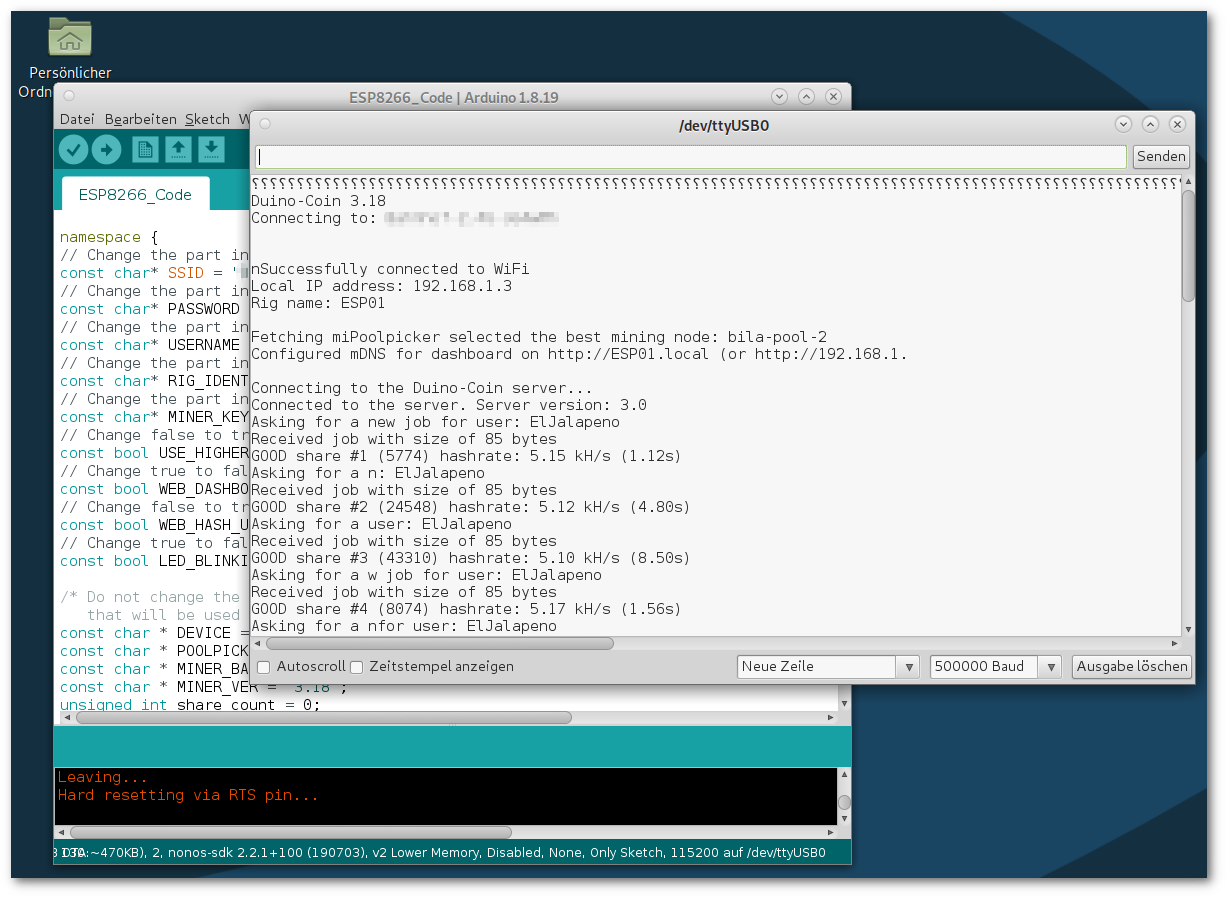 Mining with an ESP8266 (ESP01), followed in the serial monitor of the Arduino IDE.